What is Figma design? 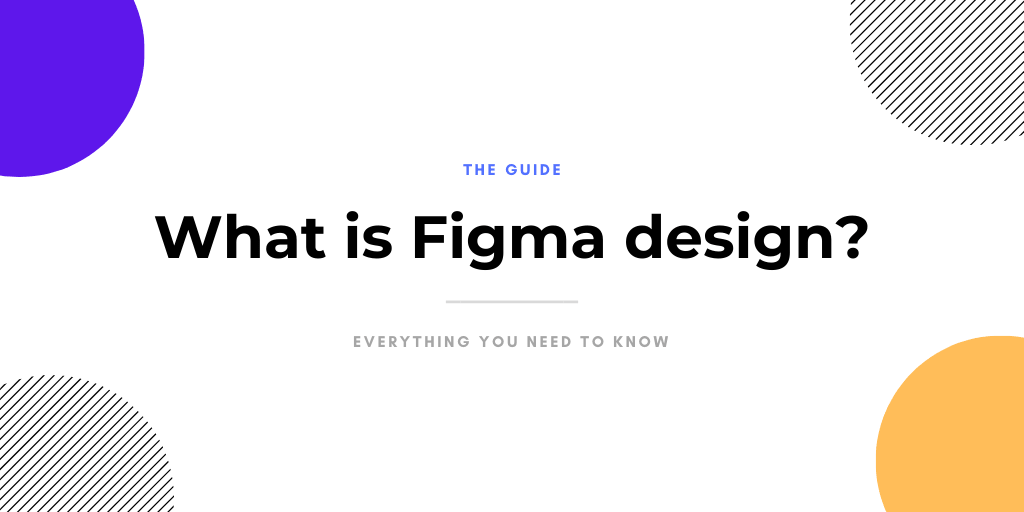 Figma design is a cloud-based digital UX and UI design tool that's compatible with any system.

It's versatile, user-friendly, and collaborative.

Whether you're an UI designer, UX designer, founder, or a developer, you can use it.

UX, UI, and what it has to do with Figma

Because UX and UI have their differences, let’s first get those definitions cleared and out of the way.

While getting those terms confused is understandable, let's examine them.

First, they both are tied to the utility of a (digital) product.

UX design is the hands-on manifestation of the human first design principle. A major concern for almost every product today is user friendliness.

When looking at companies like Ikea and their well-thought-out floor plans, it's user-friendly.

The labels and signs are clear and legible, and if one does get lost, all they have to do is look around. There will always be a sign pointing to the desired direction.

The key question of UX design is: how easy is it to accomplish what the customer set out to do?

It's so important to understand the UX design is applicable in all products, not just digital ones. UX design is at the core of any product designed for use.

On the other hand, UI design is strictly linked to digital projects.

UI design is focused on the look of digital interfaces.

The main job of a good UI design is consistency, coherency and aesthetics.

The objective of UI design is to be a user’s clear visual guide through a digital product’s interface. UI design deals in the look and feel of an interface. The work of UI designers is tied to icons, buttons, imagery and colour schemes.

Another important part of UI design is accessibility. This includes colour schemes that can be accessed by colour blind users, for example.

Excellent UI design is above all intuitive.

UI design is all about the user not having to think while using the product.

You may be thinking, ‘Technology is dumbing people down!'

But do you really like having to trek through a maze just to be able to buy a new dishrack?

So, what are the concrete differences between UX and UI design in the digital sphere?

Figma is a nifty design tool that caters to both these design elements.

In other words, it's much easier to keep the whole process of, say, designing an app under one roof, so to speak.

UX and UI design are much easier and much more effective if they can be researched and modified in tandem.

Figma design at a glance

Figma was first launched in 2013, and since it has become one of the biggest design tools on the market.

It is constructed in vector based graphics, rather than a pixel grid. This allows scaling to large sizes without having to sacrifice the quality of the picture rendering. The images are traced along paths and they can be as simple as a straight line or as complex as a multi layered, extremely detailed picture rendered to perfection.

Because it's a cloud-based, you can access it on virtually any system.

Which is great, since many design programs are only available for Mac OS.

This, in my opinion, is incredibly valuable, especially considering the flexibility.There are many Windows users who also need to design and collaborate.

Cloud-based tools mean that you can work, no matter what system you're on.

Another big advantage of Figma is that there is no install necessary (unless you want their desktop app).

And the cherry on top?

Because there is no install necessary, you won’t have to worry about the dreaded updates.

And the thought of not having to install something is kind of comforting, isn't it?

Then again, this might be leftover trauma from the crashes that were common while installing computer games in the past!

However, all of this isn’t the real game-changing element brought forth by Figma design.

Possibly the best thing about Figma is that it is collaborative.

Teams of people can work on the same projects without having to play pass the parcel with them. Reverting back to our story from the beginning, Figma allows both UX and UI designers to work in harmony.

Because of the collaborative feature, many big name companies have opted in to use Figma. Digital giants such as Twitter, Dropbox, Slack and the more popular by the day Zoom.

Bryan Haggerty, a senior design manager at Twitter, praises Figma’s efficiency. He loves the speed, organisation and the ease of file sharing with co-workers.

With the shift of business practices, remote work is gaining traction in the world today.

The possibility of collaboration is one of the main selling points of Figma design.

Sarah Kuehnle, vice president of product at Dribbble, acknowledges that Figma immediately stood out to the company largely due to the collaborative possibilities. Keeping the entire team in the loop has never been as simple.

Head of design at Zoom, Shawn Lan, shares the story of initial trials of design and engineering concerning Zoom.

A wide set of tools were being used by the designers, resulting in a predictable mishmash of chaos. Or just enough to make the need for one cohesive program and one place where the different elements of the product would be stored.

The fact that Figma operates entirely online also makes it a strong contender on the UX and UI design market. It also makes it one of the most convenient design tools.

Femke van Schoonhoven, a product designer at Uber, describes Figma as a great way to organize your design projects. It helps you find everything you need when you need it.

Even if you do somehow go offline while working on a project, it will not only be saved if it’s open in a tab, you will also be able to continue working on your project until you go back online.

This makes for a very nice comfort blanket.

So, many of the “digital giants” are turning to Figma for all their design and even some of their prototyping needs. The ability to let multiple people collaborate is enough for companies and freelance artists to celebrate.

However, in the words of Baloo the Bear in The Jungle Book, there’s more, lots more. In the next part, we will explore some of the key features and amenities offered by Figma design!

There are a lot of useful features and tools in Figma. It offers a forward-thinking yet incredibly logical scheme. All of these features will make any project run smoother and be easier to get done.

We have already mentioned the wide array of possible collaborative projects on Figma, which is indeed one of its one of its most important and valuable features. We therefore needn’t spend more time analysing that. It is a life-saver, plain and simple.

Figma design also has a commenting system. This keeps everyone in the loop at all times.

Related to this, it has an unlimited number of viewers allowed. This means clients can be kept up to date on the project without having a constant back and forth between the creators and the clients.

Figma offers a lot of smart solutions to various issues. It's possible to create flexible styles that can be saved directly to your projects. This is especially useful when you need to create a wider range of similar digital products.

Figma also operates with Open type font features, offering a large number of fonts that can be displayed in any OS. This again ties in with the collaborative concept surrounding Figma design. That is, designers and contributors can play nicely together.

The smart selection tool is yet another handy feature, as it adjusts spacing, arrangement and organisation automatically.

It also has a built-in image database along with existing templates. It also features a drag and drop accessible libraries, so design templates and images have never been more accessible.

Figma design also offers a version history feature. This means that all previous versions and subsequent changes to the project can be tracked, and it also shows the contributor by whom they have been made. Easy export feature has a live link, rather than a flat PDF file which makes sharing even easier.

One large issue with many design programs and platforms is the pricing.

Oftentimes, the high subscription fees can be quite the pest to users.

Even when offered, free plans can have substantial restrictions, as they often serve as a not so gentle nudge to convert to one of the paid plans.

Figma offers a free plan, which can be instrumental for small businesses and freelancers alike.

The free starter plan does have limited number of contributors (two) and projects (three) with 30 day version history available. These restrictions still allow all the necessary tools for creating products. Best of all, it comes with unlimited cloud storage. It also allows an unlimited number of viewers.

It's easy to see how Figma is the right choice for designers and startups. Or even new designers who wish to test the limits of their creativity. After all, one never knows when and where a brilliant can strike.

The professional plan is quite affordable as well, at $15 per editor per month. It brings all sorts of useful features, including unlimited version history, unlimited and invite-only projects. It also has a shareable team library, making this plan is great for mid-size projects and businesses.

In simplest terms, it's the most versatile of the plans and a good value for money.

The organisation plan is the most expansive (and expensive) one at $45 per editor per month.

This last feature is especially important for big businesses, which tend to be the major part of this plan’s user base. It’s important to note that this plan is only available at the annual subscription.

Figma offers a discounted price for an annual subscription. It’s also free for educators, which is just a great initiative.

In conclusion – is Figma right for you?

However, indie designers love Figma as well. Really, the best part of it that it’s completely customisable to the user’s needs.

It’s equally useful to businesses of any scale and singular users of any means and resources. Figma allows creators to see the project from inception through to finish. It’s organised and stored in a clear, logical way which is crucial for any type of design work.

When one considers all of these things, it’s clear that Figma is well worth the attention from any design demographic.

Plus, it’s completely web-based. So, it’s as hassle-free as a design tool can get. And hey, we can be lazy creatures by nature, even if we don’t always want to admit it!

So, the answer to the question posed at the beginning of this segment would probably be yes.

UX and UI-wise, it’s one of the most versatile and useful tools you can get. And even if you decide it’s not for you, there is no need to worry about uninstalling to get precious memory back – the little x button in the top right corner of the browser is all you need.